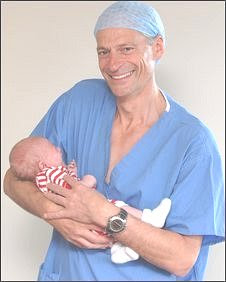 The first baby conceived with the help of a new egg screening technique which could offer hope to women for whom IVF has repeatedly failed has been born.
Oliver was born to a 41-year-old woman who had had 13 failed IVF treatments.
The new screening method, developed in Nottingham, allows a rapid analysis of the genetic material in fertilised eggs to check for chromosomal abnormalities.
The British Fertility Society said the technique was promising but that more research was needed.
Professor Simon Fishel, who led the team, said Oliver's arrival showed that the test could help couples who have repeatedly failed to become pregnant.
"All the team have been waiting for this very special baby to be born.
"Oliver's birth is an important landmark in shaping our understanding of why many women fail to become pregnant.
"Up to half of the eggs in younger women and up to 75% in women over 39 are chromosomally abnormal.
Array Comparative Genomic Hybridisation is used to screen eggs or embryos in an IVF cycle, evaluate all the chromosomes and select the most chromosomally normal embryos."
Before an egg is fertilised, it ejects half of its own set of chromosomes to leave space for the chromosomes coming from the father's sperm.
Miscarriages
These "spare" chromosomes are kept in a structure on the edge of the cell known as the "polar body".
Array CGH involves extracting the polar body and looking to see if there are too few or too many chromosomes.
It is believed that two out of three women fail at each IVF attempt because of chromosomal abnormalities in the implanted egg.
The team at Care Fertility Clinic have found a way of speeding the analysis of the genetic material they extract.
Two years ago US scientists announced that 18 women had given birth after having their eggs screened using a similar technique.
But in those cases the resulting embryos had to be frozen and re-implanted later.
The Nottingham team can get the results back in 24 hours which means that the mother can undergo IVF in the same cycle of treatment.
Oliver's parents had 13 previous failed IVF cycles and three miscarriages.
Eight eggs were tested and only two found to be chromosomally normal. One of those produced Oliver.
Great hope
British Fertility Society chairman Tony Rutherford said the technology offered much promise but the widespread use of it should await the outcome of further rigorous research.
He said there was no compelling evidence yet that pre-implantation genetic screening (PGS) tests, in which embryos are looked at for genetic abnormalities before they are implanted in the womb, improved the pregnancy rate or live birth rate.
He said: "All too often we see groundbreaking news about techniques that seem to offer great hope, but fail to live up to expectations when applied in widespread clinical practice."
Professor Peter Braude, head of the department of women's health at King's College London, said he was delighted that the mother had achieved her positive outcome after so many years of trying but he too sounded a note of caution.
"At the moment this can only be viewed as a potentially very lucky result," he said.
Stuart Lavery, a consultant gynaecologist and director of IVF at Hammersmith Hospital in London, said: "This technique is a very poweful tool that may allow us to detect which embryos of the many produced in an IVF cycle have the best chance of implantation and resulting in a birth.
"Clearly this is very early days, and our optimism needs to be tempered with caution until we have more evidence of the technique's safety and effectiveness.
"My own unit at the Hammersmith has recently been given an HFEA licence for microarray CGH and we look forward to contributing to this promising new field."
SOURCE: BBC.CO.UK
Posted by Omo Franca at 11:33 PM