As the technology of freezing eggs improves, more options open up for women 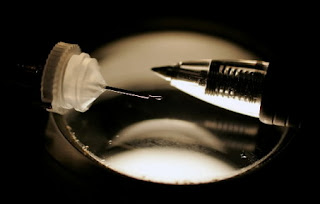 If you're not a woman of child-bearing age, you may never have heard of egg freezing.
But this form of in vitro fertilization has gained traction as its success rate has improved.
Pix left:A cryoloop, a critical tool in advancing pregnancy results from frozen eggs, is smaller than the point of a pen, right. Film is placed on the loop, which holds eggs for freezing
It was in 1978 when the first "test tube" baby was born in England. There, doctors fertilized an egg with sperm in a petri dish, then implanted the resulting embryo into the womb. Since then, hundreds of thousands of women have conceived using this method. In 2006, more than 54,000 IVF babies were born in the United States.
IVF using frozen eggs is newer. In the past decade, as many as 500 babies worldwide have been born from embroys that originated from a thawed-out egg. The first report of such a baby was in 1986. In 2007, the United States recorded its first baby born using both frozen egg and frozen sperm.
Egg freezing appeals to several groups of people, including young cancer patients facing life-saving but fertility-damaging treatments and women who want to extend the window of opportunity to have children because they don't yet have a life partner in the picture.
Couples undergoing fertility treatments also may be drawn to egg freezing. Perhaps they don't like the idea of having to destroy unused embryos or keeping them in limbo. Or -- erring on the side of caution -- they opt for the procedure to avoid the potential issue of custody: Unlike embryos created with a partner's sperm, frozen eggs, which belong to the woman, don't pose problems. (Who "owns" the embryos has landed more than a few soon-to-be-ex couples in court.)

Because oocyte cryopreservation (the medical term for egg freezing) is still considered experimental by the American Society of Reproductive Medicine, many U.S. fertility clinics only offer the service to cancer patients.
But that may soon change.
In 2006, an experimental program at Toledo Hospital's Fertility Center of Northwest Ohio welcomed the arrival of its first baby born from a once-frozen egg.
"It was our fertility doctor's idea [to join the study]," said Stacey LaPointe of suburban Toledo, who was 31 when her eggs were retrieved and frozen. "I think we were a little leery, a little hesitant at first."
But after doctors explained the process to LaPointe and her husband, Ryan, the couple decided to go forward.
"We had tried other things unsuccessfully," she said. "It was one of those crapshoots. The odds were so low, we thought, 'Well, it's worth a try.' "
Doctors froze seven of LaPointe's eggs. The five that survived the thawing process were fertilized. Two embryos were implanted, and the other three were frozen.
On Aug. 21, 2006, Claire LaPointe was born.
"We were thrilled," LaPointe said.
On April 1, 2008, she gave birth to her second child, Katie -- conceived the old-fashioned way.
Cleveland Clinic's Beachwood Fertility Center has frozen the eggs of a dozen cancer patients over the past two years. Roughly half of the Clinic's cancer patients do some type of "fertility sparing" procedure, such as embryo or sperm freezing.
As part of a trial to demonstrate that the procedure can work, the Clinic's Partnership For Families program recently picked up most of the expenses -- egg donation, freezing, thawing and fertilization -- for two healthy women in their early 40s who used frozen eggs from a woman in her early 20s. The two women have progressed beyond their first trimesters.
Prior to these two pregnancies, talking to cancer patients about freezing their eggs wasn't a comfortable conversation. No one knew if the success at other clinics could be replicated at the Clinic, said Dr. James Goldfarb, director of the in vitro program at the Clinic's fertility center.
Now, he said, "It's so much nicer to say, 'We can freeze your eggs and have a reasonable chance of this working.' "
The Clinic will consider on a case-by-case basis whether it will offer egg freezing as an elective procedure to healthy women.
University Hospitals Case Medical Center hopes to develop an egg-freezing program in the next six months, said Dr. William Hurd, director of the division of reproductive endocrinology at UH's MacDonald Women's Hospital. And like the Clinic's program, the hope is to expand it to healthy women.
Increasing chances of success
The closer you are to 40, the less likely you are to be a good candidate to freeze your eggs. The cutoff age at Extend Fertility Inc. in Massachusetts is 40, while the Florida Institute for Reproductive Medicine in Jacksonville won't accept women over age 38. CHA Fertility Clinic in Los Angeles has a cutoff of 35, with few exceptions.
Beyond age, women need to be as healthy as possible.
So what's the optimal age to freeze one's eggs? About the same that a woman should thinking about having kids.
"Before 30 is ideal," said Hurd. "In her 20s is a good time to have the first child."
At the Florida Institute for Reproductive Medicine, 53 babies have resulted from frozen eggs in the past nine years. One of those babies is now 3, the child of a cancer patient whose frozen eggs were thawed, fertilized and then carried by a surrogate.
At last count, the University of Bologna in Italy has reported a 25 percent success rate using frozen eggs -- roughly one baby for every four pregnancy attempts -- resulting in around 150 babies.
A clinical study operated by Extend Fertility Inc. -- which works with five partner centers in Boston; Austin, Texas; New York; Beverly Hills, Calif.; and Seattle -- has resulted in 13 babies born from women who used frozen donor eggs, said spokeswoman Marla Libraty.
"The data is early, but it is encouraging," she said.
CHA Fertility Clinic in Los Angeles -- which touts itself as the country's first commercial egg bank -- has had 27 babies born. Five women are currently pregnant.
At the Florida Institute, between 40 percent and 50 percent of women who have had about 10 eggs frozen and then thawed have taken home a baby, said program director Dr. Kevin Winslow.

"In theory, eggs may be stored indefinitely. It is the freezing and thawing process that damages the eggs, not the duration that they are frozen," said Scott Brown, spokesman for California Cryobank.
Dr. Glenn Schattman, a specialist in reproductive surgery at Cornell University's Weill Medical College in New York, says many clinics don't know what their success rates will be because they haven't thawed any of the eggs that they've frozen.
"Most programs don't have their own data," he said.
Most of the women who come through the doors of CHA Fertility Clinic in Los Angeles end up not going through with the procedure, said clinic director Dr. Vicken Sepilian.
"The big misconception is that it's a sure thing and it can be done at any age, that fertility doctors can undo the clock," he said.
Prospective patients should do their research and homework before committing to freezing their eggs, Sepilian said.
Some of the most important questions to ask a clinic: How adept are you at freezing and thawing? What is your pregnancy success rate? How many babies have been born through the specific technology at your clinic?
"It's not this magical treatment that's going to work 100 percent of the time," he said. "It's a backup plan."